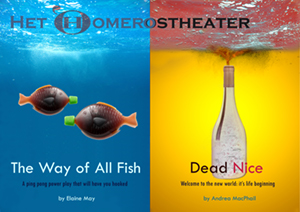 The Way of All Fish & Dead Nice Het Homerostheater presents a double bill of dark comedy!  The Way of All Fish (by Elaine May) and Dead Nice (by Andrea MacPhail) give you rivalry, power switches, and edge-of-your-seat dialogue as each story unfolds to its final-twist climax.

The Way of All Fish
Performed and directed by Lara Stanisic & Sandy Topzand
It’s sink or swim for a New York executive when her secretary stirs up the waters. Will the big fish take the bait? Holy mackerel! This ping-pong power play will have you hooked!

Dead Nice
Directed by George Hansel and performed by Delphine Ural and Lydia Muijen
When Sonia dies, the last person she wants to see is Trish,her old nemesis. Things rachet up until the truth finally unites the pair in a doubles match to set some things straight!

This time they have rented Branoul for their performance